Scholarships for Gap Year projects between school and university for boys and girls in H.M.C. (The Headmasters' and Headmistresses' Conference) schools.

The Origins of the Fund

The fund originated in 1952 from a bequest from a previous Secretary of HMC, W. A. Bulkeley-Evans.

In September 2001, after protracted negotiations, the Charity Commission agreed to a scheme whereby scholarships could be granted to "pupils" so that the awards are now open to girls as well as boys.

The administration of the Bulkeley-Evans HMC Scholarship Fund

The fund is administered by a Board of Trustees. They meet twice a year. The Trustees are:

The Trustees have appointed an Administrator, responsible for the day-to-day administration of the fund. From September 2015, this is Neil Mason, formerly Deputy Head of Taunton School

Dr William Bulkeley-Evans (1870-1952), permanent Secretary of the Headmasters Conference from 1904 to 1935, was also a significant figure among British charities and voluntary associations, both during the First World War and after the armistice of 1918.  He had three lifelong interests: international understanding through travel; the disruptive effects of war; and the education provided by the public schools.  A century later, all three live on in the travel scholarships that he bequeathed and in the activities each year of the 25-30 ‘Bulkeley-Evans scholars’ who work for community projects overseas.

William Augustus Bulkeley-Evans was descended from one of the most powerful families in north Wales.  The Bulkelelys were established in Anglesey by 1450 and prominent in regional politics for four centuries, sending members or nominees to parliament from the mid-sixteenth century down to Victoria’s reign.  Born in 1870, the son of an army colonel, Bulkeley-Evans was educated abroad before going up to Jesus College, Oxford, from whence he graduated in 1897.  After Oxford he was called to the bar by the Inner Temple in 1907.  However, he never practiced at the law for by this time he had found his métier as an Edwardian public administrator.  In 1904 he had been appointed the third permanent Secretary of the Headmasters’ Conference (HMC) on an initial salary £75 per annum.

Although not a practicing barrister, Bulkeley-Evans based himself in chambers as his range of charitable activities and public appointments increased, first at 12 King’s Bench Walk and later at 5 Paper Buildings, Temple.  His first task at HMC was to bring order to the records of the Conference.  The Secretary’s main duties were to organise the annual Conference of headmasters – usually at a school, at one of the ancient universities or in London – and to service its standing Committee, chaired by a head elected by his peers.  By the time of Bulkeley-Evans’ appointment the Conference had met on 28 occasions but there was no cumulative order governing its proceedings.  Rather, its workings were guided by 200 or more resolutions passed by the members but scattered in somewhat haphazardly preserved printed reports.  By 1906 Bulkeley-Evans had drafted a full constitution for the Committee and put its communications on a professional footing through the publication of regular bulletins.  He had also, as editor, significantly expanded the annual Public Schools Yearbook.

The war changed everything.  For Bulkeley-Evans, the effects were practical and served to extend significantly his pre-existing interests in colonial matters and empire settlement.  His childhood had been spent abroad and his wife had been brought up in Montreal as the member of a leading French Canadian family, the Dufresnes.  Moreover, there had been Bulkeleys prominent in Canadian affairs since the eighteenth century.  In addition to his HMC duties, during wartime Bulkeley-Evans was for two years director of the exports branch of the Ministry of Food while also finding time to serve as secretary and treasurer for the Public School’s Hospital of the British Red Cross and on the council of the Enham Village Centre for disabled ex-serviceman in Hampshire, established in 1917 to rehabilitate soldiers suffering ‘the effects of amputations, neurasthenia, shellshock or fever’.

During the war he also became prominent in several institutions dedicated to maintaining imperial networks.  He was chairman the Over-Seas Club (which raised over £1m. for the comfort of troops), a member of the council of Royal Colonial Institute and secretary of its After the War Empire Settlement and Rural Employment Committee, honorary secretary of the Migration Committee of the Royal Empire Society and a member of the executive council of the 1820 Memorial Settlers’ Association of South Africa (commemorating the 4,000 or so settlers, many of them very poor, who arrived in the Cape in around 60 different parties between April and June 1820). 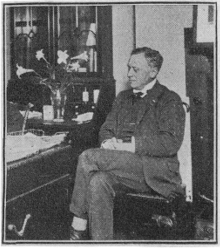 William Bulkeley Evans in 1916 at the offices of the Over-Seas Club,

Aldwych, where he was Chairman of the Central Committee

After the war Bulkeley-Evans maintained his active interests in re-settlement.  A particular commitment, derived from his wife’s upbringing, was his work for McGill University in Montreal, serving as its Honorary Representative in Britain and presiding each June over a matriculation examination in London for candidates seeking a university education in Canada.  On the home front, he extended his concern for problems of post-war re-settlement.  He served as chairman of the employment branch of the Officers Association of the British Legion and developed links with the new Ministry of Labour – now responsible for training and employment of the disabled such as those received at the Enham Village Centre – by becoming chairman of the National Appointments Committee for the employment of ex-officers and ‘educated ex-servicemen’.  The aim of the committee was to generate employment and, in the early post-war years, 79,000 ex-servicemen of this type were placed ‘in commercial or professional firms’.  However, by 1924 there were still 2,300 men on the committee’s books many of whom, Bulkeley-Evans reported, were ‘very near want and are suffering from the greatest of all tragedies, that of being unable to provide adequate support for their wives and children’.   The following year he was made CBE for this service, in addition to the OBE he had received in 1920 for his work with the Red Cross.  He was also made Chevalier of the Order of the Crown of Belgium (1919) for services to that country, while McGill conferred on him an honorary doctorate of laws.

All of his activities meant that within the Headmasters’ Conference Bulkeley-Evans was an expert in the difficulties of placing former pupils in employment at home or abroad during the economic retrenchment of the 1920s.  In this connection, The Times reported that ‘he was more of an adviser and guide to the head masters than a mere secretary’ and, in a related development, he presided over the period during which HMC admitted international members, so bringing to it the sense of connection to the dominions overseas that had animated his entire career.

In May 1935, on reaching the age of 65, Bulkeley-Evans was obliged to retire as Secretary of HMC, after 30 years’ service.  He remains the longest-serving of the fifteen secretaries that HMC has appointed since 1897.  At the Conference held at Clifton College in December 1934 he was thanked for his long and distinguished service and responded by remarking that the work had been both ‘interesting and varied’.  At his last meeting of the HMC Committee he received a ‘testimonial’ subscribed to by a great majority of the members, thanks being mingled with what The Times described as a more ‘general regret’ at his going.

Bulkeley-Evans’ advice on overseas careers for school pupils continued to be sought by headmasters of the Conference in his retirement.  Meanwhile, he maintained a special interest in Enham Village Centre, serving as its honorary treasurer during a period when many fundraising events were held to support the injured ex-servicemen there.  In 1937 Bulkeley-Evans was awarded the Coronation Medal by George VI and in the late 1930s he was a member of the Non-Intervention committee, an Anglo-French diplomatic initiative supported by most of the British public designed to isolate Spain during its civil war and so reduce the risk of a new European war.

William Bulkeley-Evans died at his home in Brighton in May 1952.  His estate, including proceeds from an auction by Sotheby’s of antique and decorative furniture, led to a scholarship fund being established out of the terms of his will.

The original scheme laid down that grants were to be made to suitable boys in HMC schools going to Commonwealth universities – a broadening of Bulkeley-Evans’ deep involvement with McGill.  However, there were very few applicants, and the capital in the fund appreciated considerably.  In 1987 the Charity Commission agreed a scheme whereby grants could be made to boys in HMC schools undertaking gap year projects prior to university.  In September 2001, after protracted negotiations, the Charity Commission agreed to a revised scheme whereby scholarships could be granted to ‘pupils’.  Thus, awards are now open to girls as well as boys who travel overseas to work with community projects and the scholarship fund is thriving.